The Sky at Night 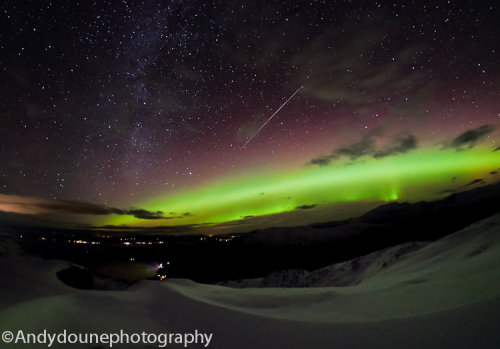 Weeks of waiting for a break in the bad weather, but at last 2 days of better conditions with 10cm of fresh snow, so where to go? One of my favourite hills on Knoydart is Beinn Buidhe, a long winding ridge with superb views to the east and west for mid winter sunrise and sunset. Unfortunately, for the the third trip in succession, the weather hadn't been listening to the Met Office. So just as I reached the ridge, over came the cloud and out went the light. Still I was up there ready for the dawn.
Fortunately 6 hours later I did check outside the tent and the skies had cleared. In fact it was stunningly clear, and it seemed a bit bright considering there was no moon - and no wonder. The sky to the North was lit up by an awesome display of the Aurora Borealis as well as, mostly to the South, the Geminid meteor shower was more a deluge with up to 10 meteors a minute. With one camera which way do I point it? The aurora won (always) but luckily a few meteors also fell into shot. If anyone would like to see the resulting timelapse sequence please have a look at the Doune-Knoydart Facebook page.
Two hours later, back to the tent in anticipation of a dawn to remember.
And so it nearly was! Great - clear skies, light mist swirling around the hill tops and only a light breeze. But 20 minutes before the pre dawn colours came in, over came the cloud, out went the light and up came the wind. No choice, but to pack up and off the hill asap.
So not one image that I had hoped for, but really a night to remember.