The hill of the bees. 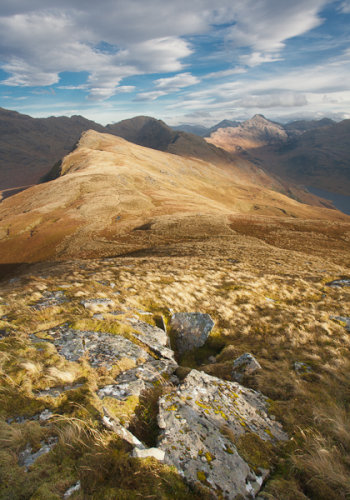 The Indian summer continues. The wind was like having a hairdryer blowing in your face, but high up, strong enough to take you off your feet. No need to have taken the tripod - far too windy, so just had to rely on a higher ISO setting on the camera in order to handhold any shots.
A walk over Sgurr Coire Coinnichean (the hill of the corrie of the bumble bees) with hopefully the last of the red deer rut still going on. However the hills were silent (probably the warm weather), but with a fabulous cloudscape I hoped for some great light later on in the day.
Sitting in the lee of the hill top views back over Aonach Sgoilte and Luinne Bheinn were superb early on with only a pair of ravens to share it with, but as the sun set into the west it disappeared into a thick layer of cloud blocked the anticipated show. It did give a pretty sky to watch, but provided no illumination to the surrounding hills, so an early descent to Inverie .
Still a lovely first day out.