Image with a story 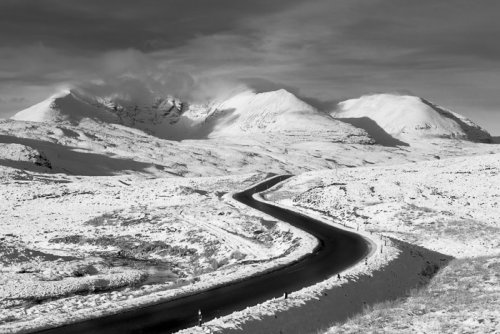 Just back from a weeks visit to Wester Ross and the amazing mountain of An Teallach. I had a great time attending a course run by Open Studio Workshops, where like minded photographers can get together to complete a task based project. Our theme was a portrait of An Teallach, and the end result an exhibition held at Inverewe House. Excellent facilities provided by Adrian Hollister, photographic advice by Colin Prior and a masterclass in processing and printing images by Eddie Ephraums. Helped by the superb winter weather the participants came up with a broad selection of images for the final show (which I believe will be viewable at Inverewe at weekends until the spring).
My own contribution was this image of An Teallach from the infamous Destitution Road near Fain. This is somewhere I've wanted to visit for many years and wasn't disappointed.
The road was bulit by the local inhabitants during the mid 19th century in return for food aid when the lcal population was devastated by starvation and disease following the potato famine of 1848. A ‘destitution test’ was administered to ensure that each man worked their required hours. A day’s work involved eight hours of labour, six days a week. Oatmeal rations for the workers were set at 680g for men, 340g per woman and 230g per child.
Several of these roads were bulit, but this one extends 126-miles from Cromarty on the east coast, to Gairloch on the west.
So for me, this image has far more to say than just a nice shot of the hills. I hope you enjoy it.